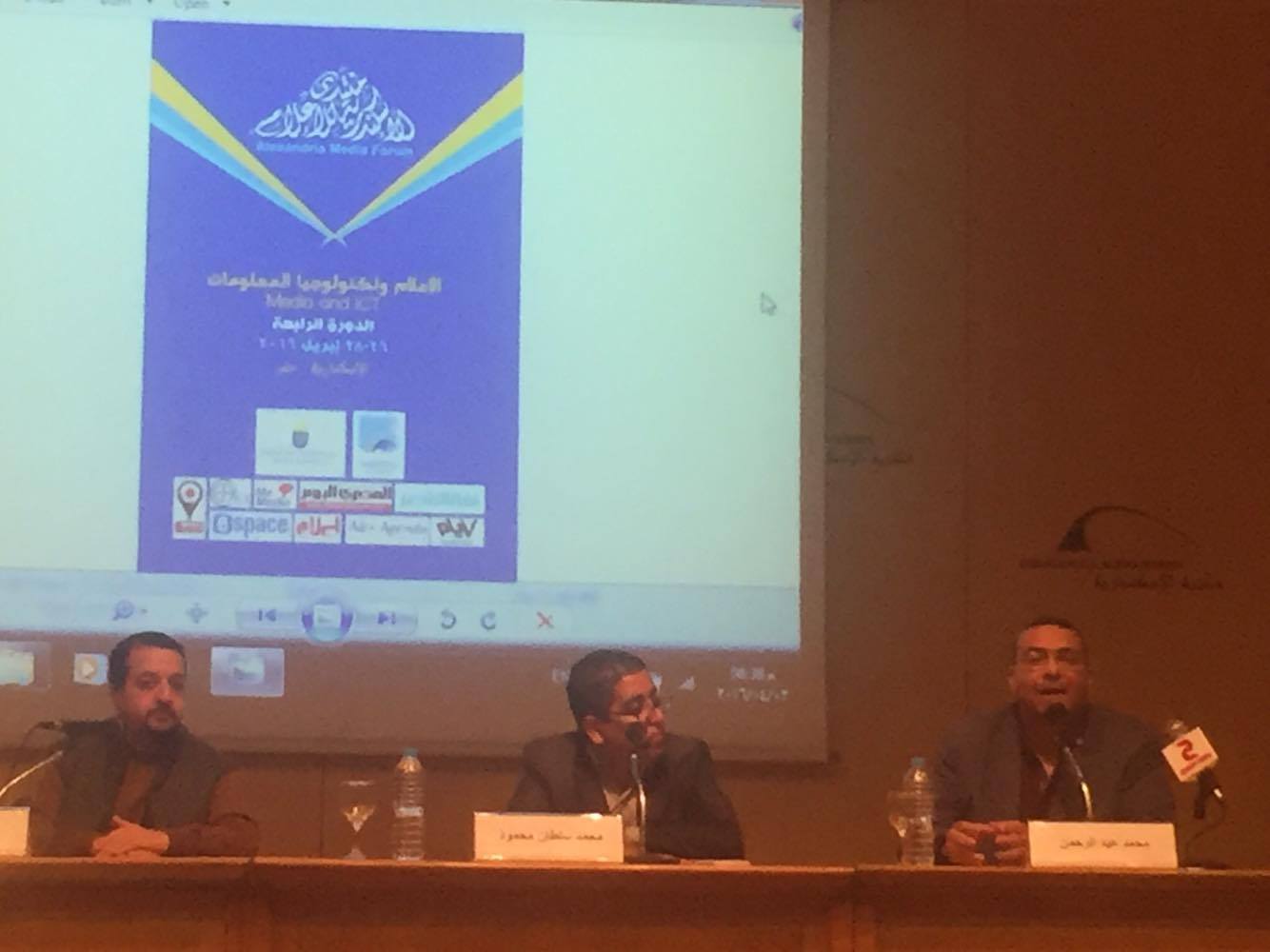 On second of April, BA has set up a seminar about successful experiences in the media field, which was held in its small theatre at 7:30 pm.

As a part of the framework of the cultural program for the Bibliotheca Alexandrina’s International Book Fair, this session was primarily made in order to; epitomize prosperous models in media career as: “Alexandria Media Forum”, represented by its founder Ahmed Esmat, and the experience of “e3lam.org”, illustrated by Mohammed Abdel Rahman. This was by the presence of Mohammed Sultan Mahmoud, who was the moderator of the event.

The book fair began on the 23rd of March and will continue until 7 April. The Egyptian Publishers Union is responsible for organizing the book fair, along with Bibliotheca Alexandrina. The fair includes a selection of such lectures and get-togethers to facilitate communication and enrich cultural life in Egypt and the Arab world. According to the website, the book fair is held to accomplish the Library’s mission: “This is in line with the Bibliotheca Alexandrina’s mission to raise awareness among all members of society, specifically the youth; to promote the needful impact of reading for different generations and create opportunities for dialogue between publishers, readers and writers.”

Mohammed Abdel-Rahman said that the media drove many things in society in recent years, hence the idea of ​​”e3lam.org” flourished directly after the Egyptian revolution. The role of the site was to follow-up what is happening in the media, having a main concern with positive well-targeted media.

The event was attended by a variety of audience from different educational background. Some were journalists, writers, poets and students. They all interacted positively when the floor was opened for questions and discussions, which indicated a high level of interest.

Hind El Shennawy, one of the attendees and a media student, said: “The seminar tackled a lot of important issues facing the media today. I think it has a huge power that influences the people. At the end the last word is for the people and the viewers, they’re the one’s who get to decide who stays and who goes, they get to decide who to follow and who to support. That’s why we need to enhance the public’s media literacy.”

“The people must act as watch dogs for the media”, Ahmed Esmat said, “In Sweden, for example, the government investigates the complaint submitted by the people against the media, which means that the media can bring a lot of problems to the community”. He also added that he believes that the public has a vast role in the suspension or continuation of any presenter.

Alaa Emara, one of the attendees and a media student, said: “E3lam.org is an outstanding gateway to rectify the media path through the positive criticism and experiences exchange.” Then she added about the forum, “Alexandria media forum is a very useful chance for any media man. For a country in our tight situation particularly, and with the increasing number of users and figures who report the ability of people to participate and to respond to media content, all of that really will push the media to achieve transparency, as well as; make it incapable of hiding information or submitting it incorrectly.”

Alexandria media forum began in 2012 as an idea, and was created in collaboration between Alexandria Cultural and Tourism Development Foundation and the Swedish Institute; in order to raise the operational performance of media skills in various fields. Also, to have a regular meeting for professionals on the local level in addition to Arab countries. The last three gatherings of the Forum were a success. The forth cycle will be running at the twentieth of this month in the Swedish institute after filtering the participants according to international standards through a set of juries.

“The event was great. It delivers a great message to me as a media student. The first forum is a great opportunity to learn and to gain experiences,” said Tala El Bahie, a student at the Arab Academy.

Abdul Rahman asserted, “The number of females in the media is much greater than the males maybe because they are more ambitious and have greater insistence. But the gender is not the name of the game; we are more concerned with the necessary skills and the ability of acquiring capabilities.”

By the end of discussions Essmat emphasized that the media won’t renovate without a political commandment.