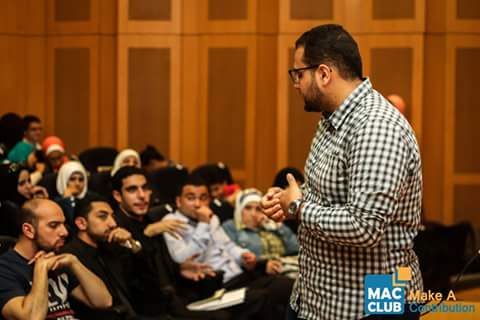 Women justice and gender equality at work, had been a hot topic for years among different countries until this current moment. This year; 2016, on the 6th of May, a new debate has been brought to light in the city of Alexandria, Egypt: (Women Justice & Gender Equality for Refuges).

With the rise of political awareness, feminism, freedom of speech and entrepreneurship across the Middle-East, MAC Club & GIZ (Deutsche Gesellschaft fur Internationale Zusammenarbeit) collaborated together to launch this event that focused entirely not only on the role of women in the Egyptian society, but also discussing personal, financial and employment problems that face the refugees.

The event was held at Alexandria Center of Arts (http://ebdaaalex.gov.eg) with approximately 28 attendees in addition to 20 refugees who interacted with the audience and shared their stories.

Egypt recently has been a land of opportunities for people with innovative ideas as the number of startups and young entrepreneurs are rapidly increasing. Many of these startups were founded by non-Egyptian young businesspeople, Syrians as noticeable example. However, the speakers who attended were not businesspeople or investors, they were simply refugees with no business plan in mind. Imagine if you were a refugee outcast in another country, what would be the first thing you would do in order to acquire shelter, food and an income?

The event started by a simple workshop consisting of questions; questions like unemployment for women, early marriage, salary equality between genders, and education and its effect on raising the children. This workshop was held by Mohamed Abdelaziz and the audience were very interactive.

The second workshop was led by Hagar Alaa u Dee the title of “power walk”. The idea was to give a piece of paper to six volunteers, and each paper contains a specific identity, for example “a student responsible for a family”, or a “housewife” and the organizers asked us questions like: Do you have the freedom to return home late? And each person upon their given character would answer. “Yes” means a step forward, “No” means you remain at the same place. Another question, “Do you have the freedom to travel and study abroad?” And so on. The point was to see which personality had the freedom to move and make choices.

Later on a discussion was initiated for a comparison between women employment in Egypt and in Syria.

Ahmed Fawzy Founder / For Them – عوناً لهم gave a very rich speech talking about the difference between people who support a cause only through Facebook for example and others who truly work for it. He highlighted that refugees need offline assistance.

In the end the organizers were screening a movie that discussed the struggle of a poor Egyptian woman who created her own project. Many of the refugees related their story to hers. A final discussion was then held by Hossam El Dein Gaber which was about the audience’s analysis on the movie.

In the end of the day people understood the struggle of the refugees, and on the other hand the refugees were empowered and exposed to new philosophies, ideas and stories.