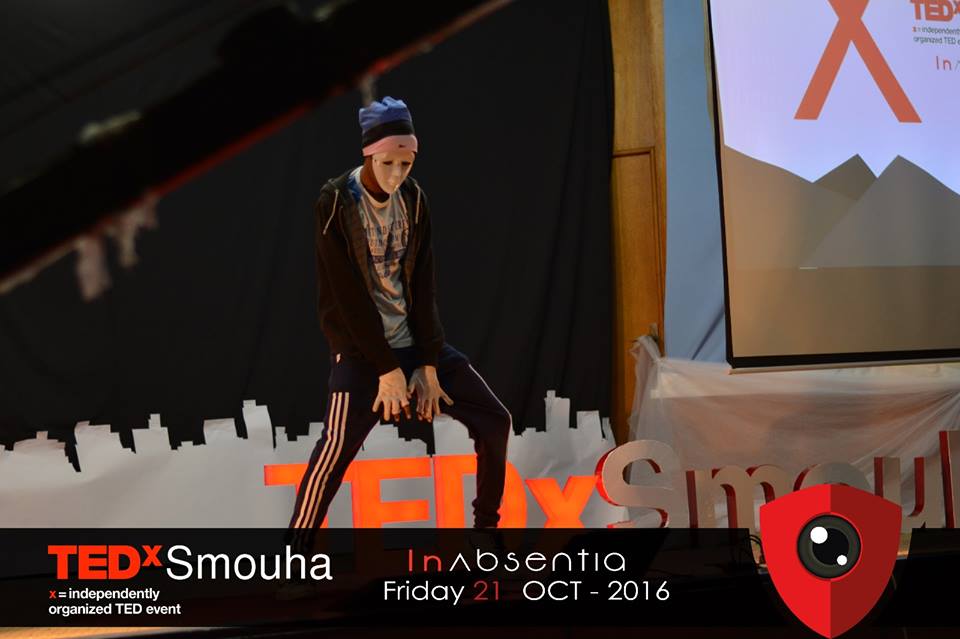 It has been ages since the last time someone woke me up at 7 AM shouting eagerly “TEDxSmouha we started strong and we will end it strong”. I yawned and thought this would be another boring day that would be added to my long history and as usual everyone of the black shirted organizers standing out there would have a seat and all I would hear is the snores. However, they appeared to be busily helping each other to cover my wrinkled walls with black charts emblazoned with “Before I Die” and crowned my stage with the brightly lit red letters of “TEDx” and 6 more white letters of “Smouha”.

Three hours later, I was surprised by the unexpected number of attendees and how the barefooted organizers managed to seat them without a squeak while I was enjoying the opening music. Soon the first cluster started with the ambitious Mohamed Nassar who explained how bacteria could be used in cancer treatment. The following talk was given b the incredible Mahmoud Mansi about the philosophy of time and how it is interconnected with mass production and individual productivity. Later on an outstanding Syrian musician Salim Nassar performed an inspirational song about his war-torn country. He left no dry eye in the auditorium, I even felt that my wooden boards, upon which he and his performing troupe danced, reverberate with excitement.

A short while later after the break, the amazing Marwa Atta owned the stage with her personal experience with depression and how this affected every aspect of her life. Her talk was followed by a resound round of applause that filled the hall. Subsequently, a talk about peace and faith in humanity was given by the warm-hearted Sarah Cockey from the US who showed everyone how to convert cultural barriers into bridges of peace. After that sir Haitham Elhariri introduced creative solutions to improve the educational program in Egypt in a short period of time. Then they moved on to divorce with Mr Khaled Al-srougy who elaborated how it affects those who have experienced it and the Egyptian society in general. Furthermore, Romaysaa and Rodaina joined with El Amin Mostafa who put on a break dancing performance as the two talented girls completed a picture of the celebrated rebel Che Guevara. Despite the color drops that accidently fell on my stage, I was delightfully entertained.

During the second break, the organizers were gathered to prepare the stage for the third cluster; meanwhile, the witty photography team took sneaky pictures of the organizers. Soon the cluster began with the unforgettable singer Ahmed Hawary Keko. I was deeply surprised by how the attendees enjoyed the nostalgia evoked by his covers of old cartoon songs, namely, Pokémon. He was followed by Dr. Rauf Elshamy who talked about entrepreneurship and his goal to be millionaire before the age of 30. Later on an inspirational talk, about how words and expressions can have a great impact on people, was given by the humorist Dr. Ali Ghozlan.

Did I mention the purpose of the hanging black charts? They were left put up for anyone who would like to share his/her life goal and so an exceptional TED Talk with the title “Before I Die” was displayed. A few minutes later, the microphone was given to the beautiful Ms Shereen Zeyady who bought on the perfect recipe to kill the beast, also known as, stereotyping. Unfortunately, the host announced that the following talk was the last, where Eslam Guinena talked about the Humans’ destructive footprints and how they could save Mother Nature. However, the hilarious host, Moaz Yassin, impersonated famous characters and left all the amazing attendees and passionate organizers laughing in stitches.

But the highlight of the day was right before the end when the organizers signaled to each other to get ready for turning off the stage lights! A few minutes later, a group of 3 boys wearing special suits adorned with remotely controlled colorful neon threads of lights, Illumob, owned the stage with their very first anti-gravity show in Alexandria. Soon after the memorable well-edited closing video, including all the sneaky snaps taken throughout the day, was displayed TEDxSmouha’s head considerately thanked everyone who supported them in a brittle voice and his high spirited team who said goodbye the their guests and then they made the most of the empty auditorium by taking loads of pictures with me! So this was a brilliant way to round off this special occasion. Only then did I notice that I was condemned IN ABSENTIA and today’s talks snapped me out of it and really made my day. To be honest, being the X was the best take home message I have ever witnessed.

In case you are still wondering who am I? I am the grand theatre of the Engineers syndicate at Alexandria.

My Employee is My Strategic Partner